Well, it's no surprise that I am a big fan of Linux. On my blog I usually post about Linux stuff often enough.

Now, as you might know, I use a Kenwood TS-480satt, still love it, and that uses a RS-232 bus to communicate to my PC (and so do most transceivers, as USB has just come to the very latest models of all normal brands). And for as far as i know, most rotators use rs232 as well. My old PC had 3 of those RS-232 ports as I added an PCI card with 2 extra ports. 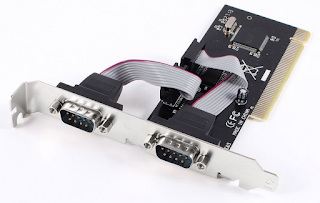 So I started to look on the one site that solves 99% of my problems... www.ebay.com
And I found myself a new PCI-e card..... 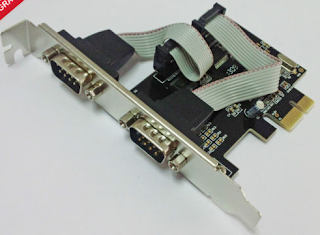 Now you have these in 2 and 4 ports , or 1 parallel and 2 serial ports......
And they claim that these work under Linux..... NO THEY WILL NOT... (at least not out of the box, and not without tinkering a lot on your system) They are not worth to do so anyway....

These cards use a chip-set called CH382L and those might work fine with a simple driver for windows(not tested), but for Linux they are a major pain up the a$$ as this chip-set has not found its way to the Linux kernel (yet).

I tried 2 nights in a row to fix this... no luck what so ever.... google did not help a lot either, it just came up with a lot of results of either not working solutions, or people like me searching for a solution.... 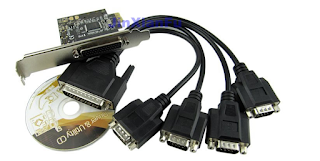 Now this MSC9904 chip-set does work out of the box when using Linux Mint 17.2 (so my best guess would be that Ubuntu and Debian will work as well as they are builds from the same Linux tree)

When using those cheap a$$ USB-RS232 cables, it usually means that as soon as you start to make a QSO , the cable malfunctions. this PCI-e card does not have any problem with that.

An other HAM, who tested one of my cables, said that this usually has to do with the harmonics of the used frequency being too close to the internal oscillator or the max232 ic used in the converter.
I personally think this could be solved with proper shielding and such, as my way too expensive cable has no problem with this for as far as i know.

So as a conclusion, as long as you buy the MSC9904 chip-set, you're good to go!
I noticed that if it has this chip-set, they will write it on the eBay page. I guess the sellers found out that Linux users are looking for this ;)
Yes, it is not as cheap as the others, but this at least works.....

Hopefully this will help you out when you buy a new PC without PCI and RS232 (which is basically any new PC you can buy these days.)
If any one found another chip-set that works, please do tell us in the comments!!

Email ThisBlogThis!Share to TwitterShare to FacebookShare to Pinterest
Labels: Linux in the shack, RS232