For those who know me this will be a huge shock.... for which i want to apologize in advance.
Today was one of the biggest ham-fests in the Netherlands (or Holland for people who do not realize we're not a province of Germany)
And on this ham-fest i bought a new dual-band transceiver which is capable of C4FM/FDMA, also better known as system fusion. It's the YAESU FTM-100DE . 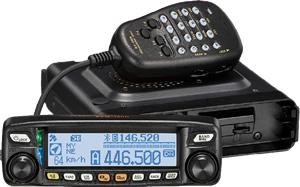 I never cared at all for any digital modes what so ever.... But system fusion is different.....
It's different in that it does not rule out analogue. It detects it by itself.
And somehow it gives me a totally different gut feeling then d-Star or DMR. Also not having to register at any "authority" is a great plus in my humble opinion too....

So i will make an in debt post about this radio as well..... but for now just the first impressions....


I fiddled around about 15 minutes with the set, and 15 minutes with the software. looks ok so far, and i really like the display, i'm 100% sure the readability of this display in a car is awesome.
Ohh and did i mention build in APRS?? This set is quite loaded with goodies for a great price...

I will play around with it a few weeks and write something more in depth after.